on April 12, 2019
My 5-year rez day is coming up in June. I’ve lasted approximately 4 years an11 months longer than I might have thought when a real-life friend encouraged me to give the game a try. I had never heard of this sort of virtual world and had very little understanding of the connections that are possible. I also had no idea that a virtual world built entirely by its members could be a thriving, wondrous place.

Today, I got a lovely reminder of the talent and skill in SecondLife™. I was about to take my usual topless Tuesday solo pic in my studio in front of my plain black background. Then a couple of files were dropped on me by the owner of M:NA, Nicasio Ansar.

The first one contained the Adventura top and shorts that he’ll be showing off at The Liaison Collaborative starting April 3. It’s a functional set, with Nica’s usual attention to fit and the splendid curves of the Belleza body. But it was the second object that made me break out in a huge smile. 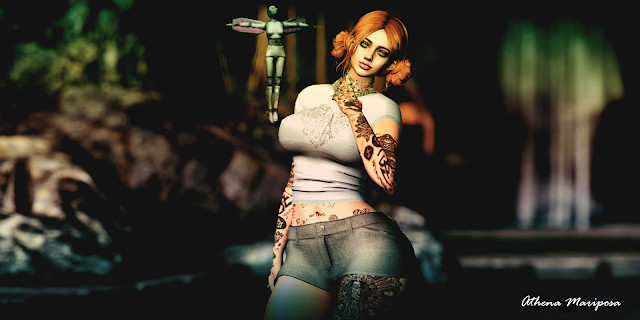 As Nica explained, Felicia was made because he wanted to learn how to create in Animesh. I am no expert at what that means, but Felicia is a delightful, mechanical fairy that dances, pirouettes, and even waves from just off my shoulder.

My last name in SL is Mariposa. This word means “butterfly” in Spanish. I’m a thyroid cancer survivor, the symbol of which is the butterfly. I wore a butterfly tattoo for years and am a sucker for anything with wings. I love fairy art. To have this little mechanized wonder appear in my inventory, I could not have been more thrilled.

Felicia will be available at The Seasons Story on April 10. Be sure to drop by and pick her up. You’ll love having her on your shoulder … and on your side.